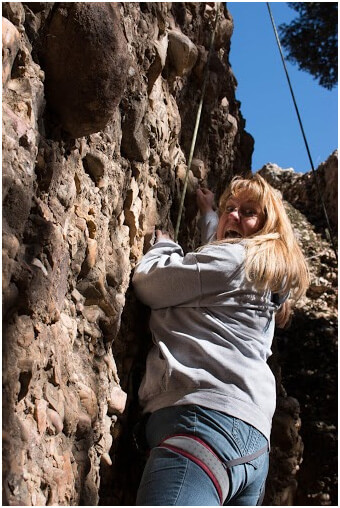 By: Julie Anderson, Oxbow Academy
In November, we went rock climbing with the boys in Maple Canyon (Often referred to as one of the best places to rock climb in Utah, attracting climbers from all over the world. – Read More about Maple Canyon here. ) I knew we had a fun day ahead of us, being outside in the perfect fall weather, and having fun watching the boys just be boys. Little did I know what awaited ME! 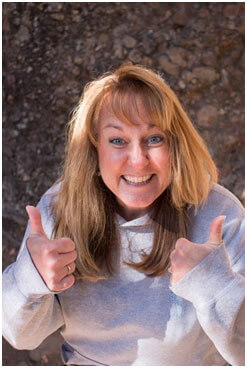 As the boys were listening to our instructor, Thomas, and as we watched his demonstration on how to get in the harness correctly and climb up the rock face (which he did, by the way, very quickly and smoothly!), I started thinking to myself, “I wonder if I could do this? It’s only been about 25 years since my husband and I went rock climbing up Provo Canyon, so how hard could it be now?”

After watching several boys scale the side of the mountain with ease, I figured, heck, if they could do it, so could I! I decided to go for it!!

When I stepped up and said I wanted to try it, the boys had to pick their jaw up off the ground!  They couldn’t believe that I would actually do it!  When I put the harness on, they all about died laughing, seeing this ol’ Grandma getting ready to climb a mountain!  THAT made me even more determined to do it!

Once I had the harness on and was looking up at the path the boys had taken, I started getting nervous.  Would I fall?  Would the gal who was belaying me really be able to keep me safe?  (She was about half my size!)  What if I fail and the boys don’t respect me anymore?   By now, I was at the point of no return.  There was no way I was backing out, now that I had the harness on (which looked about as awkward as it felt!).

As I began looking for hand and footholds, I started shaking.  I was so excited!  I was really going to do it!  With the boys cheering me on, I reached up and grabbed my first hand hold and . . . slid back to the ground.  Wait!  What just happened?   I decided to place my foot on a rock jutting out about two feet up and then stand up to grab a hand hold higher up.  When I placed my foot on that rock and then reached up for the hand hold, I was SO excited . . . until I slid back down again.  Wait a minute!!!  This couldn’t be!  Now I was more determined than ever to do this.  I was mad and my reputation was at stake here.  I looked down at my now broken fingernails and gave it all I had.  Slowly, but surely, I went up two foot holds and two hand holds!  I was doing it!  I was really doing it!  Then I slid down, yet again.

After multiple tries had resulted in multiple fails, the boys and my co-workers started feeling sorry for me, so they began to figure out ways to help me succeed.  One of my co-workers even helped me by allowing me to use their leg as a foot hold!  When all was said and done, I had only gone up the side of the mountain about five or six feet.  But I was happy.  I didn’t go anywhere near as high as the boys, but I tried it and I was happy I did.

Now some may think I completely failed that day and made a total fool out of myself?  Maybe, but here’s how I’d rather look at it; I tried something that was way outside of my comfort zone!  Just like the boys have parents, therapists, etc., to help them get through life, I had a harness, ropes, etc., to help me get up the mountain.  And most important, I had my friends to help me and cheer me on when I was struggling.  I didn’t make it to the top of the mountain that day, but I conquered my own mountain!  I call that a success!

Posted in The Program