Marcus struggles with staying engaged and recognizing that he is wasting time as well as his parent’s resources.  Learn how experiential therapy and his equine experience at Oxbow Academy are helping to change that!

The air was cool. Dust-filled beams of light snuck in the arena through skylights at 45 degree angles. Bright diamond-shaped patches lit up the sandy floor of the arena. Barrels, fence posts and cinder blocks made up an obstacle course for the 1,500 pound horse named Whiskey.

Marcus, the teenage boy in the arena, is enrolled at Oxbow Academy and is struggling a little bit with the motivation necessary to make therapeutic progress. Whiskey, the above mentioned horse, struggles with the motivation needed to move through the obstacle course without taking short cuts. Together…they just might make a good team and be able to learn from each other! 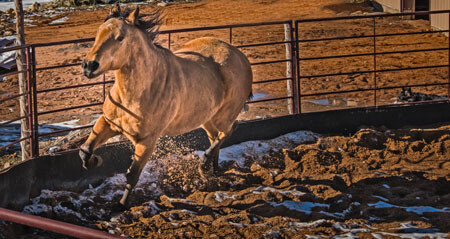 Please allow me to share some of the back story that brought us to this point. Sometimes it can be difficult for students in residential treatment to recognize how much time and resources are being wasted by not fully engaging in therapy. This can be demonstrated by not following through on assignments or simply avoiding the painful therapeutic issues. It is often difficult for adults to face painful issues in life, so this experience I’m about to share with you isn’t without understanding that Marcus is still a teenager.

Whiskey has been exposed to obstacle courses many times over his lifetime, yet he still fights the process. If there is a jump he is asked to go over, often he will simply go around it. Whiskey doesn’t really like the obstacle course. If a horse could talk, he would be saying; “why go over a jump when you can go around it much more easily?”

So, I had an obstacle course set up. My goal was to have Marcus lead Whiskey through the obstacle course. I set it up with some poles to walk between, a couple of cones to walk around and two jumps to go over. It certainly wasn’t the most difficult obstacle course ever created, but it should do the job! Marcus and I went around and identified which obstacles represented certain aspects of his therapy.

1) Walking between the poles was like following the rules.
2) Going around one barrel was keeping up in academics.
3) Going around another barrel was maintaining his residential and clinical levels.
4) The jumps represented his commitment to therapy and actually doing the work.

Standing next to the horse, Marcus had the task of leading Whiskey through the obstacle course. As mentioned, Whiskey hates going over the jumps and Marcus had quite the struggle each time they came to a jump. At one point, Whiskey went over the jump the wrong way. Marcus paused for a moment and then said,

But Marcus knew it wasn’t. I told him he needed to do it over and he ended up going back through the course having wasted some time.
Those reading this might be thinking;

“This sounds good, but how is Marcus actually learning from this experience?”

As mentioned previously, Marcus struggles with staying engaged and recognizing that he is wasting time as well as his parent’s resources. So, I brought Marcus an apple pie with ice cream on top. Marcus loves apple pie! I mentioned that the pie represented the “resources” being expended to have him in treatment. The rule was; if he and Whisky missed an obstacle, or didn’t move through in an appropriate time frame, some of his pie would be thrown on the ground. Wasted time and energy on the obstacle course meant that a scoop of that pie was going straight to the ground and joyously lapped up by the dog. The lesson being; you can’t get back wasted time and resources. 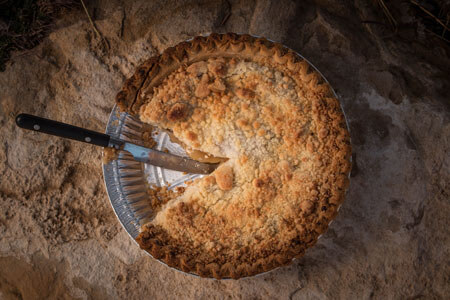 Marcus finally made it though the obstacle course with Whiskey. He didn’t have a whole pie, but he was excited to eat what was left. His hopes were up. However, he didn’t get the leftover pie just yet. I sent him back through the course again. The lesson being that just making it through one assignment doesn’t get you through treatment; there are actually 4 phases of treatment. So, Marcus and Whiskey went through the course again, and again, and again.

By the end of this experience, Marcus had a pie crust and a small bite of pie left. As we processed the situation, Marcus expressed frustration, anxiety and sadness that most of the pie was gone. Yet, he alone had worked with Whiskey and he alone still had a choice to make. What was he going to do with the last bite of pie? He could waste it, or he could eat it.

As Tony, Britta (Horse Professionals) and I discussed this real life lesson with Marcus, he seemed to internalize the message that you can’t always get back what is lost, but you can choose what to do with what is left.

Marcus also mentioned that he could relate to me as his therapist. He said that he had been trying to pull Whiskey through the obstacles, pulling and tugging and fighting for every step the first couple of times through. He couldn’t force Whiskey through, but he sure did all he could to encourage him. But then, on the third and fourth time through, Whiskey actually responded with his own effort and Marcus’s job became a lot easier.

Marcus turned to me and said he was sorry for making me work so hard. He mentioned it wasn’t right for him to make me push and pull him through the therapeutic process. He also mentioned he doesn’t want to waste his family’s resources anymore. He thoughtfully admitted that it wasn’t fun to see something he wanted so much get tossed to the ground.

Over the last couple of weeks, Marcus has kicked it in gear. After our experience, he worked hard and earned his Independent Level, all on his own! For Marcus, that is a first. Amazing, let’s hope it lasts!