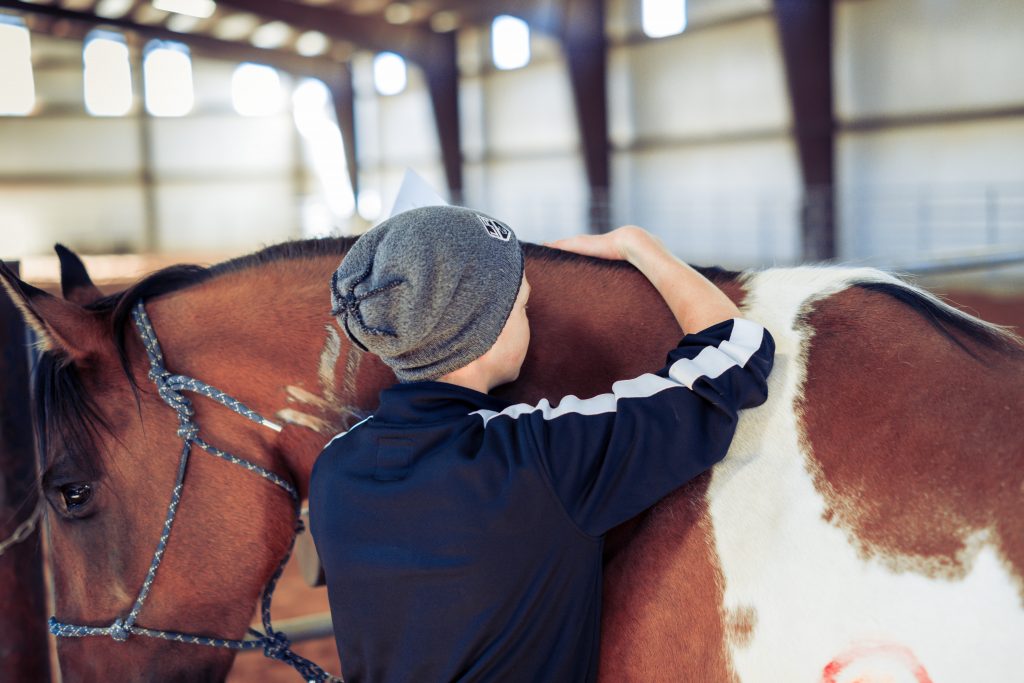 Tony North, one of our Equine Directors, is a valued and cherished member of the Oxbow family and has been since we opened shop over a decade ago. He brings a timeless example of what a real man is and should be. In passing, he presents himself as a good old boy. But as you get to know him, you become more and more convinced that few men care about others as profoundly as Tony does. As I’ve gotten to know him over the years, he has taught me that life is centered on our relationships with others.

Every year Tony brings several boys out to ride the San Rafael Swell. The Swell encompasses over 2,000 square miles of rugged and striking Utah terrain. It’s beautiful sandstone canyons have been cut deep into the earth by rivers over the course of hundreds of years. This area is rich with history and leaves behind a legacy of the classic American stagecoach bandits Butch Cassidy and the Sundance Kid.

The Opportunity of a Lifetime

Having the opportunity to ride the Swell is a once in a lifetime experience that is not only meaningful but transformational. For months one Oxbow resident, James* (real name has been changed to preserve confidentiality) strenuously labored through his treatment with the hopes that he could earn the privilege to make this pilgrimage. In the process of earning this privilege, he spent hours working with different horses and developed a special bond with a horse named Vapor. Vapor is a unique horse in that it was given to Tony by his father before he passed away.

After months of consistent effort and progress, Tony approached James and extended an invitation for him to ride the Swell. James felt a strong sense of accomplishment and dignity because of the relational work that he had done in preparation. James had earned this great opportunity and now knew its value.

That night he struggled to sleep as his mind forecasted the journey he would be taking with Vapor. When the morning of the ride came, he was up before anyone else with his boots shined, and his gear thoughtfully prepared and readied. To him, Vapor represented one of the first secure attachments that he had ever experienced. When he was with Vapor, he felt safe. Because he felt safe, he felt capable of being vulnerable, open and honest.

Tony came to pick him up after what seemed like an eternity. Next, it what felt like a blink of an eye, it was over. The two-hour drive felt like moments. He was brushing out Vapor and preparing him to be saddled. Taking care of Vapor and being able to saddle, bridle, mount and ride him made the boy’s self-esteem flourish. Equine and horsemanship created a tangible sense of confidence. Through that confidence, he started to thrive. This new found confidence acted as scaffolding to the young man’s success, it encouraged efficacy in the different areas of his life and in his vision of the future.

Change as a Process

This majestic and powerful experience in the corridors of the San Rafael Swell transported James back hundreds and thousands of years. He reflected on how the landscape had likely changed over time through the small consistent efforts of running water, eroding and transforming the landscape into the magnificent monuments that he was now seeing.

As he sat in this sacred space, he reflected on his relationships with Tony and Vapor. During this time, he started to recognize for the first time, maybe ever, that he was safe. As he continued to ride, his mind naturally reflected deeper and deeper. He grew to recognize that he was now seeing himself for who he really was; a person who loved and cared for others as well as someone who was loved and cared for by others.

The old saying, “I hear, and I forget, I see, and I remember, I do and I understand.” began to have meaning. As people do in the process of becoming their individual identity is unlocked and ignited. As James went to the Swell, he was transformed. He started to understand who he really was. The things that he had talked about for years in therapy were now being experienced. Like a blind man that could now see, he saw who he really was for the first time.

Change at its Core

On some level, his therapy was now different, enriched and applicable. Through this process, he gained a conviction that he could meet life’s challenges head-on, work through them and come up victorious. An even greater realization that James came to was that he didn’t have to go through life alone. He had learned through countless hours of attunement with Vapor that he could feel, respond and bond with others. Because of this, he no longer had to live a life based on superficial connections. Vapor had always known who he really was and loved him. Maybe, he thought, he could do the same.

As the day carried on the boy continued to process the things that had happened in his life. He started to be grateful for the chances and opportunities that people gave him. He thought about how fortunate he was to be able to have people that cared about him and wanted the best for him. After hours of moving through deep valley canyons, it was time to begin climbing out of the Swell.

James started the final ascent up to a peak where he could look back on the day’s journey. Vapor climbed strong and steady. As she did, James felt her saddle slipping as she traversed the canyon trail. His eyes moved up the hillside as he and Vapor continued climbing. He decided to adjust and tighten the saddle when he got to the top where the ground leveled out.

At the top of the trail, he dismounted. The saddle slid around Vapors body and under her stomach. Vapor spooked and jolted up the path. With every movement of her legs, she felt the saddle bump the inside of her thighs spurring her forward. Tony and his horse Chip jumped out to cut Vapor off and rein her back in, but it was too late. Vapor dashed through a small hole in the fence line and took off.

James felt shocked. When he finally left, he felt puzzled. He did not know what to do. As he and the other boys came back together, they decided to follow Vapors hoof prints and half an hour later found Vapor in a ravine with a broken leg. Her leg had caught in the stirrup. Then, when she plummeted into the ravine, her leg broke.

Frantically the James started spiraling. He began to question everything that he felt he had learned so deeply. Questions raced through his mind. Do I really care about others? Why do I always end up hurting people? As these questions emerged, they began forming into statements about who he felt he was. I am worthless. I hurt other people. No one can like someone like me. I can’t be close to others.

James looked at Vapor and her mangled body. Painful memories and sensations filled him. He thought back on his life and all of the mistakes he had made and began to question himself.

Tony sent the boys and staff over the hilltop and said his goodbyes to Vapor. After what felt like forever he rejoined the group. Tony approached James, who felt torn. Filled with fear he stood his ground as his mind took flight. He imagined being beaten, chastised, and disowned. What happened next defied all of his best reasoning. Tony embraced him for a moment and then said looking into his eyes, “It’s okay…you’ve got to learn to let it go.”

With tear-filled eyes and deep-chested sobs, fear began to fade into a secure sense of love. Vapor’s life wasn’t just lost. Vapor gave her life to teach a boy about love. As the sun started to settle on the San Rafael Swell he knew the day was coming to an end and that they would need to get back to the truck and trailer. The group gathered up their things and started the trek back. James looked back one last time as Vapor’s resting spot faded out of sight. He knew that he would never be the same.

In the months that followed a new man began to emerge. This man knew that people loved him. It was not a question. Vapor’s life served as a testament to this. Because of this, he was more willing to be vulnerable, honest, and open. Not only did he thrive in his own recovery, but he also helped convince other people that they too had people who loved them.

Now months later students still talk about Vapor and her rider. The story is a reference point that Oxbow students use to talk about the relationships that they have and the love that others have for them. The new perspectives that are crafted propel students into a place where they can move forward and develop secure attachments with others.

*This same student has graciously left us his story of healing and allowed us to share it as blog post here if you would like to read more.